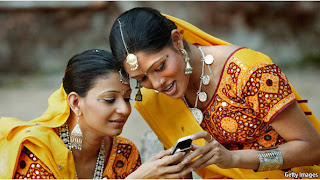 India pushed past Japan to become the third largest global smartphone market in Q1, according to a new report by Strategy Analytics. The analyst notes it’s the first time ever that India has moved up into third place. The top two worldwide markets for smartphones remain China and the U.S.
Smartphone makers including Apple, Samsung and local Indian mobile maker Micromax (an Android OEM), are driving higher volumes in the country thanks to improved distribution networks, according to the analyst.

Strategy Analytics said India is growing four times faster than the global average,with 163% year on year growth across India in Q1, compared to worldwide smartphone volumes expanding 39%. It noted that India’s market is rising quicker than China (86% YoY), Japan (24% YoY), the US (19% YoY) — and “almost all other major countries”.
The rise of India as a smartphone powerhouse is not surprising — given its huge population, including a growing, wealthier middle class, and rising interest in owning consumer electronics — coupled with parallel smartphone saturation in developed markets such as Japan and Europe. Saturation in those mature markets means companies like Apple and Samsung have been shifting more attention to emerging markets to try to ensure they maintain their own growth.
Figures put out by analyst IDC yesterday suggest the mature Western European smartphone market shrank more than expected in Q1, with total shipments dropping 4.2% year on year to 43.6 million units. This European slowdown is having the biggest impact on Apple’s marketshare, with IDC noting that iOS continues to lose ground in the region, declining to 20% in Q1, down from 25% in the year ago quarter.
Although it’s losing share in Europe, Apple has been gaining in India. Back in March IDC noted Cupertino had jumped to second place for revenue share in India, taking a 15.6% share in Q4 last year, after getting smaller local retailers distributing its iPhones. Apple has also been offering amortized payment plans to help spread the upfront cost of buying its devices — to widen access to what remain premium priced products vs the Android-powered competition.
Although Samsung and Apple are among the “key brands” driving growth in India, Strategy Analytics said it’s domestic players rather than foreign firms which are growing fastest. It name checks Micromax, Karbonn and Spice (all Android OEMs) as three examples of homegrown mobile makers with a growth rate of between 200% and 500% on an annual basis.
The local market also has what it describes as an “extra long tail of Indian microvendors” — such as Lemon Mobile — that it says is surging at 1000%+ YoY. “They are almost all using Android software, which captured 89% share of the entire market in the quarter,” the analyst added.