Electric Car Folds in Half 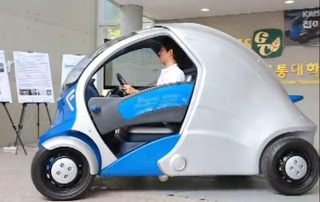 Engineers at the Graduate School for Green Transportation at KAIST in South Korea debuted a foldable electric car called the Armadillo-T. The two-seater car folds up after the driver and passenger leave the vehicle, making it a nice space-saver on Asia’s crowded city streets.
It doesn’t quite make sense to fold the car after parking it (especially if parallel parked). However, the vehicle is so tiny that you could just drive it
straight into the curb with the front directly facing the sidewalk, and the car would still fit. It’s just 110 inches at full length. When folded, it’s only 65 inches long. In Southeast Asian countries, where most people travel via motorbike or small car, this makes even more sense.
Although the car itself looks like an armadillo mated with a golf cart, the innovation doesn’t end there. The battery charges in 10 minutes and lasts for 62 miles with a top speed of 37 miles per hour. In other words, folks like Terra Motors, which produces an electric motorbike that goes for 40 miles on a single battery, will get a run for their money.
Of course, given that this car is still under research at a university, it will be a while before it hits the market. 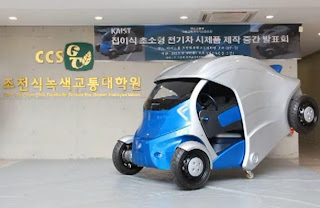