Food Helmet Sustains You With Algae 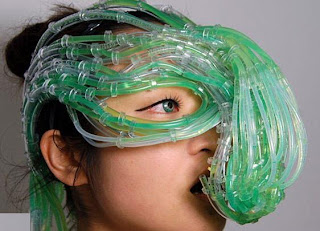 One person’s head-mounted torture device may be another person’s idea of food. Case in point: the Algaculture Symbiosis Suit. No, the above photo is not a movie still from the next installment of the “Saw” franchise. It’s a symbiosis suit, designed by artists Michael Burton and Michiko Nitta (known as Burton Nitta), that grows food while wearers go about their daily business. A series of tubes, placed in front of the mouth, capture carbon dioxide and feed it to a constantly-growing population of suit-embedded algae.
But algae needs sunlight to grow, right? Easy, the wearer just needs to sit by a window or go outside.The suit debuted last year outside the Victoria and Albert Museum. There, an opera singer wore the algaculture symbiosis suit, sang to the crowd and generated enough new algae populations during her performance that audience members were treated to a post-show snack.

Sounds crazy, right? No ones wants to eat an entire diet of algae. But hold up. You probably consume more algae than you think. That sushi you had last night and the ice cream you had for desert, even the mayonnaise you spread on you lunchtime turkey sandwich — all have derivatives of algae.“Algaculture designs a new symbiotic relationship between humans and algae. It proposes a future where humans will be enhanced with algae living inside new bodily organs, allowing us to be semi-photosynthetic,” Burton Nitta write on their website.“As such, we will be symbionts (meaning that both entities entirely depend on each other for survival), entering into a mutually beneficial relationship with the algae.”So, does the Algaculture Symbiosis Suit whet your appetite or make you wrinkle your brow? While you’re weighing your decision, check out video of the suit’s operatic debut.
via Inhabitat