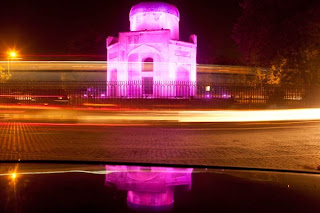 In a tangle of forgotten, overgrown brush in the heart of India's capital, a quiet plan has been hatched to change the landscape of one of the world's most populous cities. An intricate Mughal garden is being created. Crumbling sandstone tombs nearly lost to history are being rebuilt. An artificial lake is being carved out. The renovation of Sunder Nursery is intended to serve as the catalyst for an even more ambitious project: the creation of a mammoth, iconic park that would rival New York's Central Park as a refuge from urban chaos.

"It would be the place where the city descends. It would be an oasis," said Ratish Nanda, project director for the Aga Khan Trust for Culture, and the driving force behind the dream of a mega-park.To create that park would require the merger of a string of adjoining gardens, heritage areas and a zoo administered by different government agencies, an incredibly complicated task in a land where bureaucratic turfs are fiercely protected. And though some officials are beginning to discuss the plan, no formal proposal has been formulated.
But sometimes in India, it takes tenacious dreamers like Nanda to achieve the seemingly impossible.anda and the Aga Khan Trust have taken on seemingly impossible tasks before. They helped wrest a 17 acre compound in the area, along with a large monument, from India's version of the Boy Scouts. They are currently fighting with railways officials to get them to remove a storeroom blocking access to another monument. 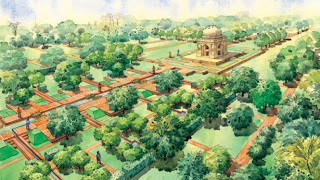 "One single man has to be there, to strive, to go out and achieve this," said Ashok Khurana, a powerful supporter and the recently retired head of Delhi's Central Public Works Department, one of the many agencies that would need to work together to create the giant park.
The payoff would be considerable. Delhi, with a population of about 17 million, is a surprisingly green city, with small parks dotting many neighborhoods and Lodhi Gardens — with a clutch of crumbling monuments of its own — attracting speed walkers and picnickers in upscale south Delhi.
The mega-park would tower over them all. 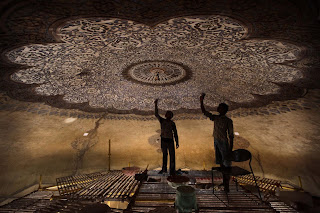 It would be 480 hectares (1,200 acres), considerably larger than Central Park. It would have 100,000 trees of more than 300 species, Nanda said. It would encompass one of the most impressive collections of medieval Islamic monuments, anchored by the grandiose tomb of Emperor Humayun, a 16th Century prototype for the Taj Mahal. It would have an ancient fort, a Buddhist stupa, flocks of exotic birds and white tigers in the zoo.
Nanda imagines families rolling out carpets on the grass in the winter and enjoying a book in the shade of a tree in the summer. He imagines people touring the tombs or just crossing the park on their daily commutes.
The heart of the dream is the restoration of Sunder Nursery, a 40-hectare (100-acre) field adjacent to Humayun's Tomb, both of which are being restored by the Aga Khan's trust. The nursery was founded by British colonists to grow experimental plants. In recent years it was barely functioning, became a dumping ground for construction waste, and was visited by a few hundred people a month.
The trust fought back a government plan to cut the nursery in half — and destroy a garden tomb — to make way for a major road planned for the 2010 Commonwealth Games, Nanda said. It had to remove 1,000 truckloads of construction rubble scattered about the fields.
It restored the 500-year-old Sunderwala Burj tomb from a gray building patched with concrete to the striking burnt orange sandstone and white lime mortar of its original design. A dozen other monuments in the nursery stand testament to the era, half a millennium ago, when the Islamic Mughal emperors from Central Asia ruled over a vast swathe of the Indian subcontinent. 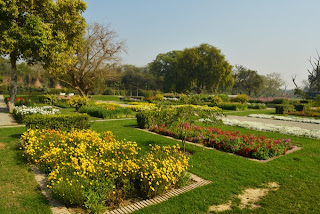 The Sunderwala Burj stands at the entrance to a Mughal garden being built under the inspiration of Persian carpet designs, with squares of grass and flower beds bordering a thin pond that will send water flowing into narrow channels and over intricately carved stone patterns.
Nearby, workers have dug a reservoir to be filled with fish swimming in water from a specially built treatment plant. That water will also flow through streams into areas forested with plants from Delhi's different habitats. There is an amphitheater and a bonsai pavilion and plans for a restaurant.