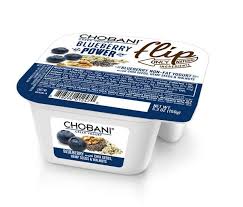 The Air Force warned personnel over the weekend to steer clear of a specific flavor of Chobani Greek yogurt that includes hemp seeds. Hemp contains trace amounts of THC, the psychoactive ingredient also found in marijuana, classified alongside heroin and LSD as a Schedule I drug under federal law. The Air Force, as part of its anti-drug policy, added hemp seed oil products and hemp seed to a list of forbidden substances in 1999, over concerns that they could confuse the results of drug tests regularly given to service members.Chobani's Blueberry Power Flip is the latest victim of that prohibition.
The Air Force made clear that yogurt flavors without hemp were still fine to eat. “The Air Force has not restricted military members from consuming Chobani Greek yogurt; rather, only Chobani yogurt that contains hemp seed or hemp seed oil is prohibited, just as any product which contains or is derived from hemp seed or hemp seed oil is prohibited,” said Capt. Adam Koudelka, the legal adviser for the Air Force Drug Testing Laboratory at the Air Force Medical Operations Agency at Lackland Air Force Base, Texas, according to the Air Force Times.Studies have shown that products made with hemp seed and hemp seed oil may contain varying levels of tetrahydrocannabinol (THC), an active ingredient of marijuana which is detectable under the Air Force Drug Testing Program. In order to ensure military readiness, the ingestion of products containing or products derived from hemp seed or hemp seed oil is prohibited. Failure to comply with the mandatory provisions of this paragraph by military personnel is a violation of Article 92, UCMJ.
Jessica DiGennaro, a spokeswoman for Chobani, told the Air Force Times that Blueberry Power Flip contains about 10 grams of hemp seeds.
An independent study by Vote Hemp, a nonprofit hemp advocacy group, found that eating a half-pound of commercial hulled hemp seeds would be unlikely to cause someone to exceed the federal limit of 50 parts of THC per billion. People who regularly consumed smaller amounts of hemp seeds mostly were below the limit, the research found. A half-pound is more than 20 times the amount of hemp seeds found in a 5.3-ounce cup of Chobani Blueberry Power Flip.
DiGennaro said that based on other research about hemp seeds with standard amounts of THC, it would be unlikely for the Chobani product to result in a failed drug test.