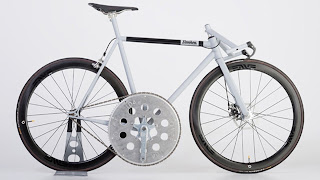 London-based framebuilder Tom Donhou has managed 80 mph on a hand-made bicycle on the open road — though indoor tests ultimately revealed his bike was capable of reaching 102 mph.
Donhou's bike is a custom-engineered contraption that he assembled with the help of a few friends, all for the purpose of showcasing the value of backyard engineering. And, of course, for making a bike go really fast. By comparison, the average person on a normal bike would probably have to push it to reach speeds around 25 mph.
In order to get his bike up to super speed, Donhou added an oversized chainring, adding significant power to the pedaler. It features 104 teeth, compared to the 20 to 50 you'd find on a normal bike. Donhou also sought more stability by positioning the chainring lower to the ground, and lowering the handlebars.
Donhou's reconstructed his Ford Zephyr to fit in front of the bike and serve as a pace car and wind shield. The car's frame blocks the wind while also providing Donhou with a form of speed control. In the video demonstration above, Donhou's friend sits at the wheel while Donhou pedals, hard. The result is an extremely fast bike ride.
"We'd hit 80 mph; essentially I had outrun my car and we had run out of road," Donhou says in the video posted on his website. "We went there to go as fast as we could, and I felt that we'd done that, and I was, you know, I was stoked," he says.
Although the world record for the fastest bike ride was set in 1995 by Fred Rompelberg, who reached 167 mph, Donhou's experiment was reportedly never really about breaking records, but about the excitement of assembling something with such power.
"It's about British engineering, it's about backyard engineering," Donhou explains.
What do you think of Donhou's bike? Let us know in the comments, below.
Homepage image: Donhou Bicycles