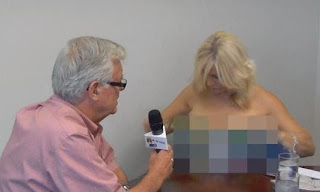 Canadian journalist Lori Welbourne tried to prove a point on International Go Topless Day by going topless during an interview with a local mayor. Welbourne was interviewing Kelowna mayor Walter Gray about whether it was legal for women to go topless in public. After defending a woman's right to do so, Welbourne asked Gray to hold her microphone and undid her halter top to bare her breasts.He barely bat an eye.  "What are you doing?" he asked."It's really hot in here," she replied.

Gray said that it is not illegal for women to go topless in public in Kelowna. "I’m not suggesting you should do that but I don’t think you’d be committing any crime or breaking any bylaw," he clarified.
When asked why it would be inappropriate, he said that the reason was probably that it was distracting. Welbourne responded that she found earlobes attractive, and asked Gray if he would cover up his ears.