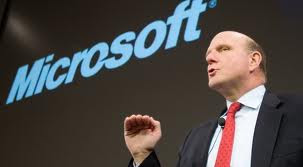 In a statement, Microsoft said Ballmer would retire "upon the completion of a process to choose his successor. In the meantime, Ballmer will continue as CEO and will lead Microsoft through the next steps of its transformation to a devices and services company that empowers people for the activities they value most."
Market scrutiny will now likely shift to who will be tapped to succeed Ballmer. Despite that uncertainty, investors applauded the news by sending Microsoft's shares surging by more than 7 percent — adding a whopping $24 billion to the software company's market capitalization from Thursday's close.

The announcement took markets by surprise, and came only a month after the Redmond-based technology behemoth announced a broad reorganization designed to capitalize on the relentless shift toward mobile technology. Ballmer acknowledged the strategic shift, as he complemented the new leadership team.
"There is never a perfect time for this type of transition, but now is the right time," Ballmer said in a statement.
"My original thoughts on timing would have had my retirement happen in the middle of our company's transformation to a devices and services company," he added. "We need a CEO who will be here longer term for this new direction."
Microsoft's traditional strengths in office software hit rough shoals, mirroring the dramatic slump in personal computer sales. In recent years, its suite of Windows and Microsoft Office products have taken a back seat to mobile applications that provide users with both entertainment and productivity.
Ballmer succeeded billionaire Bill Gates in 2000, the iconic wunderkind whose knack for technology innovation was rivaled only by deceased Apple CEO Steve Jobs. Much like Apple's current CEO Tim Cook, Ballmer was forced to wrestle with unfavorable comparisons to his predecessor, despite a much more flamboyant personal style that made for several viral videos.
Under Ballmer's leadership, Microsoft's stock languished and its rivals — most of whom moved rapidly to profit from the explosive growth of smartphones and tablets — began separating themselves from the rest of the technology pack.
Ironically, Gates himself will have a hand in selecting Ballmer's successor. Microsoft said that its board would appoint a special committee to find a new chief, which will include Gates, audit committee chair Chuck Noski and compensation chairman Steve Luczo. The group "will consider both external and internal candidates."