Grimes :why dont you go to live in a cave 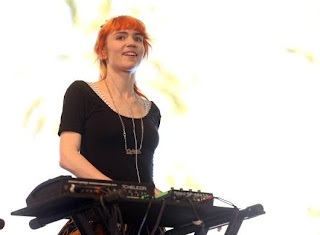 You won't see musician Grimes taking selfies on her gadgets while she's hosting the MTV Video Music Awards red carpet special Sunday — because she doesn't own a smartphone and hasn't since she lost her phone more than three years ago and decided not to replace it. "Whenever I tweet, you know I'm at home on my Macbook," Grimes, born as Claire Boucher, told Mashable. "When I'm engaging with the Internet, I like to be engaging with the Internet. And when I'm engaging with someone or something offline, I like being offline."

You will, however, see Grimes channeling her inner Daenerys Targaryen (from Game of Thrones), as she'll be sporting a new white hairdo. Grimes, known for her experimental music and fashion, also plans to wear big Versace menswear pants with a simple T-shirt, she said. New York designer Rachel Antonoff will also co-host the red carpet special just outside Brooklyn's Barclays Center.The red carpet runs along 6th Avenue and Dean Street, where residents will be able to see the celebs from their apartment.
via : Mashable