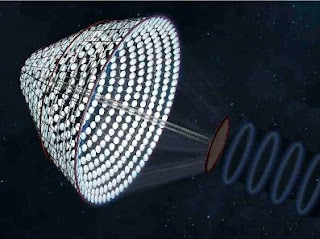 NASA's engineers are planning to deliver solar energy on Earth via platforms located in the orbit. John Mankins is heading the project which is in development stages. The project is officially called SPS-ALPHA which stands for Solar Power Satellite Via Arbitrarily Large Phased Array. The idea is to setup an array of solar panels in the shape of a margarita glass to capture solar rays and then use microwave transmission panels to beam the solar energy to the Earth in the form of radio waves. These radio waves will be received on the Earth by a large array of diodes knit together to create a mesh-like structure. This mesh of diodes can be situated anywhere - over large farms, any remote places and even at disaster sites where there are immediate power requirements.

In his interview with Vice, Mankins said that he's insisting on low-intensity microwave transmitters. This will mean that the receivers on the Earth will be large - approximately 6-8 kilometers in diameters and located 5-10 meters above the ground. There are technological challenges because converting solar energy into electricity involves larger temperatures. Mankin proposed development of solar cells that can operate at sufficiently larger temperatures and also improve the overall conversion energy. Though the project looks interesting, it may take a longer time to realise given the astronomical costs involved. Mankin says that his team is geared up for the challenge and if all things go as planned, the SPS-ALPHA would be ready to for launch latest by 2025. We're curious to know what our engineer fellows think about this project? Do you think this 'IS' the next big thing in the human's quest for solving the energy problems of the mankind?
Source : NASA