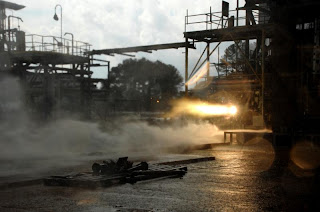 This test is a milestone for one of many important advances the agency is making to reduce the cost of space hardware. Innovations like additive manufacturing, or 3-D printing, foster new and more cost-effective capabilities in the U.S. space industry.
The component tested during the engine firing, an injector, delivers propellants to power an engine and provides the thrust necessary to send rockets to space. During the injector test, liquid oxygen and gaseous hydrogen passed through the component into a combustion chamber and produced 10 times more thrust than any injector previously fabricated using 3-D printing.

"This successful test of a 3-D printed rocket injector brings NASA significantly closer to proving this innovative technology can be used to reduce the cost of flight hardware," said Chris Singer, the director of the Engineering Directorate at NASA's Marshall Space Flight Center in Huntsville Ala.
The component was manufactured using selective laser melting. This method built up layers of nickel-chromium alloy powder to make the complex, subscale injector with its 28 elements for channeling and mixing propellants. The part was similar in size to injectors that power small rocket engines. It was similar in design to injectors for large engines, such as the RS-25 engine that will power NASA's Space Launch System (SLS) rocket for deep space human missions to an asteroid and Mars.
"This entire effort helped us learn what it takes to build larger 3-D parts -- from design, to manufacturing, to testing," said Greg Barnett, the lead engineer for the project. "This technology can be applied to any of SLS's engines, or to rocket components being built by private industry."
One of the keys to reducing the cost of rocket parts is minimizing the number of components. This injector had only two parts, whereas a similar injector tested earlier had 115 parts. Fewer parts require less assembly effort, which means complex parts made with 3-D printing have the potential for significant cost savings.
"We took the design of an existing injector that we already tested and modified the design so the injector could be made with a 3-D printer," explained Brad Bullard, the propulsion engineer responsible for the design of the injector. "We will be able to directly compare test data for both the traditionally assembled injector and the 3-D printed injector to see if there's any difference in performance."