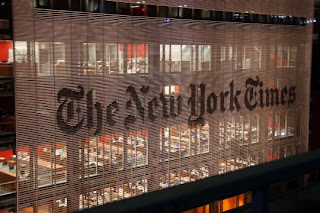 The New York Times website has attacked second time this month. The company described as a "malicious external attack".On its Facebook page, the Times said it was working to fix the outage, A technical problem knocked NYTimes.com offline on 14 August. Analysts said evidence showed a group supporting Syrian president Bashar al-Assad was behind Tuesday's attack. The website was partially back online three hours later, although some users still reported difficulties. During the outage the New York Times published new articles on its Facebook page as well as a mirror site.

Mark Frons, the company's chief information officer, warned New York Times employees the attack was perpetrated by the Syrian Electronic Army, which backs Mr Assad, "or someone trying very hard to be them".
He cautioned staff to "be careful when sending e-mail communications until this situation is resolved". Security experts said there was enough evidence to link the hacking group to the outage.
"The NYTimes.com domain is pointing at SyrianElectronicArmy.com which maps to an IP address in Russia, so it's clearly a malicious attack," Ken Westin, a security researcher for Tripwire, an online security company.In a separate posting on Tuesday, the group also claimed responsibility for hacking Twitter's administrative contact information.
'More attacks' Recently, the Washington Post, CNN and Time magazine websites were targeted in attacks attributed to supporters of the group