Teen Designs Device That Could Double The Life Of Airplane Tires 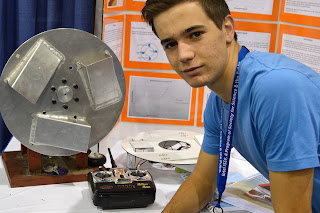 Phillipe Lothaller, a 17-year-old senior from Cape Town, South Africa, has invented a device that could save airlines big money by extending the life of tires. The metal device at left is an early mock-up of the design. A newer version (seen in white at center) has pop-up scoops instead of fixed ones. When retracted, the scoops don’t interfere with a plane’s protective wheel wells. Credit: Patrick Thornton, SS
Nervous air travelers concerned about the risks of aging planes may first worry about how well the wings or engine are holding up.
But a plane’s tires suffer a lot of wear and tear too. A new device that attaches to the wheel rims could extend the life of those tires, saving the world’s airlines millions of dollars per day.  When aircraft approach their destination, pilots extend the landing gear to prepare for touchdown. Before the plane lands, its tires aren’t spinning, notes Phillipe Lothaller. He’s a 17-year-old engineer at Rondebosch Boys’ High School in Cape Town, South Africa. But the instant a plane’s tires hit the runway, they start spinning at very high speeds. For some aircraft, landing speeds can be as high as 200 kilometers (124 miles) per hour.
That instant high acceleration is very stressful for a tire, says Lothaller. Friction can cause a tire’s rubber to quickly hit 240° Celsius (464° Fahrenheit). The stresses of landing also tend to pull the layers of a tire apart, causing them to separate from each other. This separation is known as delamination. Aircraft maintenance crews typically retread a plane’s tires after every 200 landings. And each tire can be retread only five times before it must be replaced. Refitting a plane with new “wheels” can be quite costly, with each tire running between $1,500 and $10,000.
Those costs can add up quickly, because each plane can have many tires. Large aircraft may have a dozen or more. Indeed, Lothaller found that one of the largest airlines worldwide spends more than $2 million per day to purchase and maintain its aircrafts’ tires.
Now, Lothaller has designed a device to reduce wear and tear on those tires. He attaches a large, circular plate to the wheel rim that holds the tire. As pilots come in for a landing, several metal plates on the device pop out, creating scoops. Each scoop is about 7 centimeters (2.8 inches) tall and several times that long. They catch the air, turning the device into a pinwheel. This causes the wheel to start spinning long before it touches the ground. That means the tire won’t have to accelerate nearly as much once the plane touches down. The result: far less stress on each tire.
The teen’s tests suggest that these scoops could reduce tire wear by between 35 and 45 percent. So instead of retreading a tire every 200 landings, crews could wait to do this after every 250 to 260 flights. Lothaller presented his findings May 13 in Phoenix, Ariz., at the Intel International Science & Engineering Fair. The Society for Science & the Public, which created the fair in 1950, still runs it. (SSP also publishes Science News for Kids.)
Lothaller points to other benefits from extending the life of airplane tires. For example, airports wouldn’t have to spend as much money removing chunks of damaged tires from runways. Those chunks pose a danger to planes as they land and take off, he notes. An engine might suck them up, causing damage. Or parts of the tread shed by a tire could bounce up and pierce the skin of a plane, risking a fuel leak. (Imagine the damage that could be caused by hitting a chunk of tire on the runway at more than 100 miles per hour!)