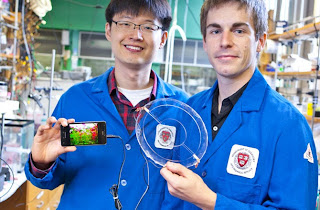 It's a tall order: make a material that conducts electricity, stretches like rubber, expands and contracts when hit with electric current, and is clear as glass. There have been many attempts, but they've all fallen short. Now a Harvard University team has done it by combining a transparent hydrogel with a conductive polymer that behaves like a motor. The work could lead to artificial muscles, transparent loudspeakers and power sources that generate electricity when squeezed or stretched. The study, led by Zhigang Suo, professor of mechanics and materials, appears in this week's journal Science.

"Suo and his team combined, in a very clever way, two known things," said John Rogers, a materials science professor at the University of Illinois, who has done extensive work on flexible, implantable devices. "The result -- a transparent, artificial muscle -- is something that is new, and potentially important as a technology for noise cancelling windows, haptic display interfaces, tunable optics and others." Rogers was not involved in this study. Stretchable electronics have been made with networks of ultra-thin metal wires, embedding stiff conductive "islands" of electronic components in stretchable sheets, or by using carbon nanotubes. Some research teams have tried mixing polymers with metals. But none of these approaches has been ideal. They are not as flexible or conductive as materials scientists would like. The Harvard team managed to make a conducting material that stretches as much as good rubber, up to five times its length.
To make the hydrogel, Suo and his colleagues combined a chemical called polyacrylamide with salt water. In the mixture, the polyacrylamide molecules formed a lattice, and the salt ions, which conduct electricity, occupied the open spaces. One surprise was the conductivity -- it was about as good as a typical touch screen. "Typically an ionic conductor like this is several orders of magnitude lower. They were written off as viable conductors," Suo said.
Via: Discovery news