What the hell is Aurora? 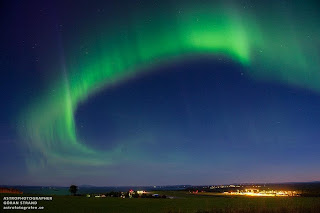 An aurora is a natural light display in the sky particularly in the high latitude (Arctic and Antarctic) regions, caused by the collision of energetic charged particles with atoms in the high altitude atmosphere (thermosphere). The charged particles originate in the magnetosphere and solar wind and, on Earth, are directed by the Earth's magnetic field into the atmosphere.Most aurorae occur in a band known as the auroral zone, which is typically 3° to 6° in latitudinal extent and at all local times or longitudes. The auroral zone is typically 10° to 20° from the magnetic pole defined by the axis of the Earth's magnetic dipole.
Photo credit:astrofotografen.se
During a geomagnetic storm, the auroral zone expands to lower latitudesAurorae are classified as diffuse or discrete. The diffuse aurora is a featureless glow in the sky that may not be visible to the naked eye, even on a dark night. It defines the extent of the auroral zone. The discrete aurorae are sharply defined features within the diffuse aurora that vary in brightness from just barely visible to the naked eye, to bright enough to read a newspaper by at night. Discrete aurorae are usually seen in only the night sky, because they are not as bright as the sunlit sky. Aurorae occasionally occur poleward of the auroral zone as diffuse patches or arcs (polar cap arcs), which are generally invisible to the naked eye.