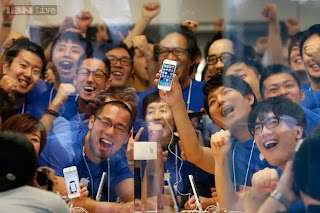 The release of two new iPhone models has already resulted in nearly double the sales of previous releases. Apple said on Monday it sold nine million new iPhones over the first weekend that the phones, the iPhone 5S and iPhone 5C, went on sale. That compares with five million iPhone 5 smartphones sold last year in that model’s first weekend. Friday’s release marked the first time Apple released two new iPhones instead of one. It was also the first time it released iPhones at the same time in multiple countries around the world, including China. “This is our best iPhone launch yet,” said Timothy D. Cook, Apple’s chief executive, in a statement. He said the company had already sold out of the more expensive model, the iPhone 5S, but more shipments were on the way.
The company did not say how many of each model was sold, but it had expected the iPhone 5S, the more expensive one, to be the more popular. Apple allowed customers to place early online orders for the cheaper 5C but not the 5S because of expected supply constraints.

Sales of the new iPhones topped analysts’ expectations. They had predicted Apple would sell between five million and eight million. The strong sales should give Apple a much-needed boost. Over recent quarters, its revenue has been flat and its profit growth has slowed. And its stock has taken a beating on Wall Street amid investors’ concerns that the company had lost its ability to innovate after the death of its visionary co-founder, Steven P. Jobs. Its stock opened Monday with a gain of about 5 percent.
“Remarkable. The rumors of Apple’s demise are clearly wrong,” said Laurence Isaac Balter, chief market strategist at Oracle Investment Research, which has clients that own Apple shares.
The sales figures apparently exceeded even Apple’s expectations. After announcing the numbers, the company issued updated financial guidance for investors. The company said that while it had previously forecast between $34 billion and $37 billion in revenue, it now expects revenue to be toward the high end of that range.