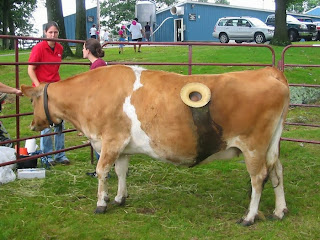 Have you heard of cows with windows? But know that they exist. They are animals that have a type of window installed at the height of the stomach that allows to observe the process digestive live animal. The process was discovered more than 150 years. According to the website slightlywarped.com , the researchers created fistulas, or openings in the bodies of cows to have direct access to their stomachs. According to the publication, the openings - located on the sides of the bodies of animals - allow researchers to observe how certain foods are digested. Scientists justify the practice claiming thus hope to develop better and more nutritious food for cattle, as well as conducting studies on diseases like cancer, for example. Although animals do not seem to care much about the huge holes in their bellies, there is no denying that the idea is somewhat daunting, besides raising some concern about the welfare of cattle.

Contrary to what many have heard, not ruminants have four stomachs, but four different compartments that comprise the set known as "stomach rumination": omasum, abomasum, reticulum, rumen. The rumen, the largest of the four, is the primary site for digestion and absorption, and due to this, is the preferred location for scientists to install a plastic device called rumen cannula that allows access to the various organs.

Fistulated animals now have an invaluable role to their own kind. The use of the technique allows researchers to collect information that enables prolong the life of animals so as to increase the longevity of the period of a dairy cow, simply by observing how fast it digests different foods and what chemicals and biological processes foods may suffer . Believe it or not, but this process lets you know which days spotted a cow will produce more or less milk thus enabling the designer to know the type and amount of food to provide different days in milk production. Likewise, research allows to know the period where the animal reach their ideal weight for slaughter being more tasty meat, soft and more proteins. The research process is simple: the animal eats and minutes, hours, then a "trainee" there will open the "small window" and removes part of the mass to study their properties. This type of experiment is only one of many made ​​with animals that the researchers are needed to help members of their own species. It is a partner in an attempt to keep the animals as healthy as possible.