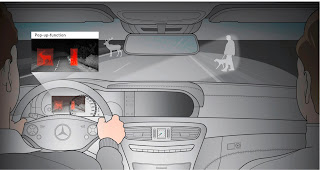 When an animal or pedestrian is detected, the systems highlights it on an in-dash display. If if the animal or pedestrian is dangerously close, an alarm sounds and the car’s brakes are activated. The European version even includes a tracking spotlight that shines a beam on live obstacles, however U.S. regulators have not approved that feature. Mercedes-Benz will introduce Night View Plus on the 2014 S-Class. Designed by Swedish safety-system company Auto­liv, the system identifies people, but also cows, moose, horses, deer, camels, and even wild boar.
How it works?

See in the Dark Headlights can only shine so far. But infrared (IR) light, which is only visible to computers and not people, propagates twice as far as visible light. That makes it useful for seeing the dark road far up ahead without blinding oncoming vehicles. If the infrared beams see something, the computer alerts the driver. Cars that use infrared technology to see in the dark either employ passive IR or active IR. Passive works using sensors that detect objects that give off heat. The sensors can detect people, animals or other vehicles up to 300 yards away. When an object is sensed, the computer projects an icon on the windshield or the dashboard as an alert. Because the range is long and the sensor is collecting information from ambient infrared light waves, the resolution of the image tends to be grainy. Active systems shine infrared light out in the dark like along with the light from headlines. The range is actually less than the active system, only up to 220 yards, but the resolution of the images is higher than passive systems.
Embedded in the car’s grill is a thermal, far-infrared camera that scans for warm-blooded animals that are out of the normal range of the headlights. On the windshield, a near-infrared camera takes an image of the road. A central control board combines that data, then cross-references the image with approximately 150 parameters to eliminate false positives.As someone who drives around with a huge dent in their truck, compliments of a spooked whitetail doe, I welcome this system with open arms. Now, if I could only afford a Mercedes…