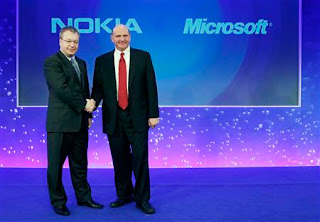 Microsoft has agreed a deal to buy Nokia's mobile-phone business for 5.4bn euro ($7.2bn; £4.6bn). Nokia will also license its patents and mapping services to Microsoft. The companies said in a joint news release that the deal will be finalised in early 2014, when about 32,000 Nokia employees will transfer to Microsoft. Nokia, once a global leader in the mobile phone market, has struggled in recent times amid increased competition from rivals such as Samsung and Apple. The transaction is subject to approval by Nokia shareholders and regulators. "It's a bold step into the future - a win-win for employees, shareholders and consumers of both companies," said Steve Ballmer, chief executive officer of Microsoft.'Number one priority'

Microsoft, one of the biggest names in technology sector, has struggled as consumers have shunned traditional PC and laptops in favour of smartphones and tablet PCs. Critics say the firm has been too slow to response to the booming market for mobile devices. It launched its Surface tablet PCs last year but sales of the devices have been relatively slow. Analysts said that the company wanted to make sure that it got its strategy right in the mobile phone market.
"Mobile is an area of tremendous potential but it has been one of weakness for Microsoft," Manoj Menon, managing director of consulting firm Frost & Sullivan told the BBC.
"Clearly the number one priority for the company is to get its mobile strategy right. From a strategy point of view, this deal is the prefect step, The only question is how well they can execute this plan."