This Amazing Accessory Turns Your iPad Into a 3-D Scanner

When most people play with a Kinect, the best they can hope for is a high score in Dance Central. When Occipital CEO Jeff Powers saw Microsoft’s innovative sensor package for the first time he decided to change the direction of his company and got to work developing the Structure Sensor, a new 3-D scanning tool that earned the company over $250,000 in a single day. Product designers can use their iPads and Occipital’s anodized aluminum add-on to scan objects and create 3-D models suitable for a MakerBot. Realtors can take advantage of its depth sensors to capture the dimensions of a room and create a 360-degree panoramic photo that can be embedded in a listing. Gamers will be able to use the slick sensor to play a bevy of games built on top of the Structure’s open API.
More than a cool gadget, the team at Occipital hopes to create a platform that will give smartphones and tablets a new set of super powers. “Everything about the Structure Sensor is designed to enable new software applications and optimize the user experience,” says Powers. The Structure employs a suite of sensor technologies developed by PrimeSense—who also created the original technology used in the Kinect. Unlike scanner apps, the Structure Sensor emits infrared light providing the device with a high quality stream of data which is then interpreted by Occipital’s software. It can scan objects in between 15 inches and 11 feed beyond its lens and will run for four hours at a time, with 1,000 hours of standby time. As a nice side benefit it also gives your iPad night vision. 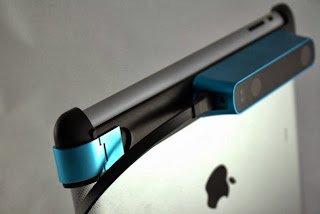 The Structure Sensor attaches to the iPad with a custom designed bracket, has no buttons or switches, and is entirely controlled through companion apps. While not officially supported, the Structure Sensor can send data to any iOS device with a Lightning connector and it’s possible to connect to Android devices, but not particularly easy. Occipital designed the product with hackability in mind and will make everything from CAD files to high-level APIs accessible to the community. The Structure’s story started in 2011 when the team had a chance to play with a Kinect for the first time. Realizing it would never reach it’s full potential tethered to a computer or flat screen they started brainstorming ways to make the technology mobile. The team knew how to make killer software—the Red Laser barcode scanner was an early App Store favorite and their 360 Panorama photo tool was popular with photographers—but in order to fulfill their vision, they needed to think outside the app and create custom hardware.