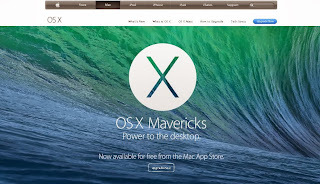 The newest desktop operating system from Apple, OS X 10.9 or "Mavericks," will be available to download Tuesday — for free.
Craig Federighi, Apple's senior vice president for software engineering, announced the details at an Apple special event on Tuesday.
Apple first showed off "Mavericks," its latest version of OS X (and the first to be named after a killer waverather than a killer cat) at the Worldwide Developers Conference in June. The OS has a few new security and power-saving and energy efficiency features, but the big change is how the system blends the edges between the iOS and OS X experience, porting in apps like Maps and iBooks.

Apple says there are 200 new features crammed into this update. Here are a few you can look forward to: