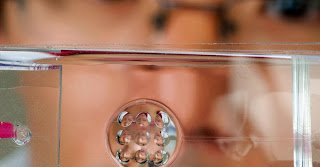 Human eyes are an ideal lens. They can easily shift focus between several objects in a given scene, even if those objects are located at different distances. Attempting a similar ability with a camera may require the photographer to change lenses.Ohio State University engineers took a crack at giving a camera lens some of the versatility of a human. They made a fluid-filled lens that can change its shape and focus, as well as alter the direction it focuses in.
The work was described in the Technical Digest of the 25th IEEE International Conference on Micro Electro Mechanical Systems. The technology could improve the capabilities of digital phone cameras and make cameras overall more reliable by eliminating the need for certain moving parts.

The OSU lens is made from a flexible polymer. The design is like an insect’s compound eye, with a single large lens made up of several small dome-shaped pockets, each filled with fluid. Tiny channels supply the fluid to each of the pockets.
By pumping fluid in and out of the pockets, the engineers were able to alter the lens’ shape and focus. The point where the image is focused can also be moved off-center. In a lens made of glass or plastic, the only way to change where the image is centered is to point the lens in a different direction.
This method of focusing is a lot like what human eyes do. In humans, the muscles in the eye squeeze the lens or stretch it a bit to change the focal point of the image. When you look at something far off, for instance, the lens in your eye becomes slightly flatter.
Another advantage of the design is a wide angle of view. This is where the designers took a cue from insects’ compound eyes. The reason flies can see behind them is that their eyes are made of thousands of tiny facets, each pointed in a different direction. The down side (for the fly) is that each of those tiny facets can’t focus very well. The artificial lens solves that problem by adjusting the fluid-filled lenses.Yi Zhao, associate professor of biomedical engineering and ophthalmology at OSU and one of the co-authors of the research, said in a news release that one focus for further development will be making the technology more practical for electronics. Fluid-filled lenses probably aren’t going to work in a smartphone. Lenses made of piezoelectric material, which changes shape in response to current, would function much better.
Via : Discovery news