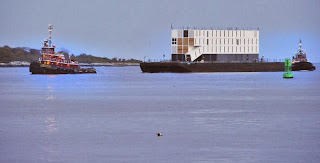 The mystery surrounding a large structure built on a barge docked in San Francisco bay is deepening. Is it a floating Google data center? A floating Google Glass store? Or something else altogether?
A company, very likely Google, has set up shop on Treasure Island, located between San Francisco and Oakland, and has been building a large structure made from shipping, or cargo, containers on a barge. Some evidence suggests it might be a floating data center, including the fact that Google itself has a patent for such a concept.Google has not responded to multiple requests for comment.The Portland (Maine) Press Herald also ran a story recently about a structure on a barge showing up there, and photographs taken by the newspaper look similar to what is being built in the San Francisco Bay. Plus, the barge being used in San Francisco and the barge in Maine are both owned by the same company, By and Large, which is leasing a large hangar adjacent to the Treasure Island pier on which the San Francisco barge is docked. I found that Tim Brandon, who was said by the Treasure Island Development Authority to be tied to By and Large, was also tied directly to Google.

Now, a report from KPIX -- the San Francisco CBS affiliate -- suggests that the Treasure Island project may not be a floating data center at all. Rather, KPIX -- owned by CNET parent CBS -- reported that the project is going to be a floating Google Glass store, and that the plan might be to tow it into San Francisco's Fort Mason for some indeterminate time.KPIX reported that Google has been unable to acquire the permits needed to bring it to San Francisco. The TV station was told that the San Francisco Bay Conservation and Development Commission has been unwilling to grant the permit. A CNET request for comment from the same commission last week was not returned.The idea of a floating Glass store is an odd one, but anything is possible from Google. In fact, after our story ran on Friday, I was contacted by someone who said he had knowledge that the project in the works is a Google store of some kind. The tipster, who is well-connected in Silicon Valley but asked to remain anonymous, told me that he had heard from multiple sources at Google that the company plans to float the Glass stores from city to city by rivers, and that the idea for the project came straight from either Larry Page or Sergey Brin, Google's founders. Finally, he said, the idea is in part that Google wants to launch stores without looking like they are trying to chase Apple.
If Google is working on building intentionally non-Apple style stores -- usually open and filled with natural light -- it's possible Google is going after an entirely different retail experience by making structures out of dozens of narrow shipping containers with few windows.
But one expert in the custom cargo container business thinks that the structure in San Francisco Bay -- at least as it looked like in pictures he was shown -- couldn't be used to hold a lot of people. To have a store, said Joel Egan, the principal at Cargotecture, you'd need big open spaces, and a building made from the "little cubbies" that are inside shipping containers doesn't seem practical. Plus, Egan said, there would need to be lots of exits, something that doesn't appear to the case on the structure in San Francisco Bay, or the one in Maine. "I would say no, it doesn't [look appropriate for a store]," Egan said. "It would be a lame store. That doesn't sound right."