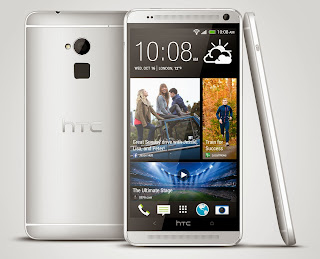 The Android-powered One Max - which includes a fingerprint scanner and a 5.9in (15cm) screen - had been scheduled to be unveiled at a press conference in China on Tuesday. The device is a larger "phablet-sized" version of its flagship model. HTC's original One was well-reviewed but has been outsold by Samsung's Galaxy S4. That helped cause HTC to post its first ever quarterly loss earlier this month.
The Taiwanese firm announced a deficit of just under 3bn Taiwan dollars ($100m; £62m) for its July-to-September quarter. By contrast Samsung Electronics has forecast record profits for the same period.
HTC said it decided to abandon the restrictions it had placed on information about the One Max after a member of the media broke a Tuesday embargo placed on its specifications. A spokeswoman for the firm said she was unable to name the publication responsible. 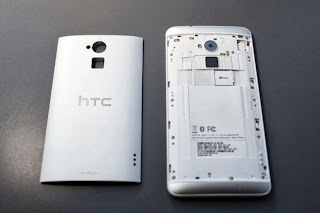 The HTC One Max's inclusion of a fingerprint scanner makes it set to be the first Android handset to go on sale with the facility in the UK since Apple's launch of the iPhone 5S in September, which included a similar component.
However, both were preceded by Motorola's Atrix handset, released in 2011. It also included a scanner on its rear, but struggled to take accurate readings, leading the firm to ditch the feature in later models.
More recently, South Korea's Pantech began selling a handset with the function in its home market in August. It has also announced plans for a fingerprint scanner-equipped phablet - the Vega Note LTE-A - but has yet to declare its launch date.
HTC said the One Max would begin its roll-out later this month"The fingerprint scanner allows users to lock or unlock the screen and quickly launch up to three favourite applications by assigning an individual finger to each," HTC said in a statement.
Apple's software chief, Craig Federighi, recently told the Bloomberg news agency it had designed a "walled off" enclave on its custom-designed A7 processor to store iPhone owners' fingerprint data to ensure the biometric information could not "escape".
By contrast the new HTC handset uses an off-the-shelf Qualcomm Snapdragon 600 processor, but the firm offered the following assurance to consumers:
"The fingerprint data is encrypted and stored in local memory and can't be readily accessed or copied. The fingerprint data cannot be easily converted into any other form or used by a third party."
However, one security expert suggested the firm still needed to provide more detail.
"The obvious question is: What kind of encryption is the company using?" said Alan Woodward, chief technology officer at the consultancy Charteris.
"The bottom line is that whenever your biometric data is being stored for security purposes it could potentially be misused.
"So, consumers will always want to be sure it is stored in such a way that if you lose the phone, it is hacked into or there's some other kind of unauthorised access, that it can't be readily obtained."