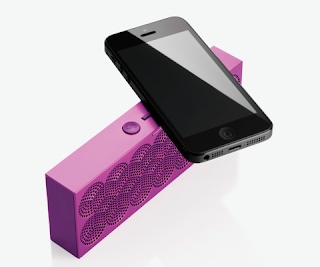 In consumer tech, we may remember this as the year Bluetooth speakers finally outnumbered insects on the earth. Every company and its brother has been cranking out compact, colorful, battery-powered wireless speakers. And no wonder: these things really are awesome. Every time some company offers a new tablet, laptop or phone, you can bet that it has a better, sharper, brighter screen — but what about the sound? It’s stuck in 2004: tinny and weak. A Bluetooth speaker neatly remedies that enormous quality difference between audio and visual.
The Jawbone Jambox was one of the earliest hits. It’s a sharp-edged rectangular box, $150, that comes in a choice of colors. It pumps out surprisingly loud, clear sound — for its size, which is 6 by 1.6 by 2.8 inches. Then came the Big Jambox, a shoebox-size $300 version with big enough sound for a backyard. And now comes the Jambox Mini, at $180.

I love this thing. It’s actually not all that mini; in fact, it’s about as long and tall as the original (6.1 by 2.3 inches) — but it looks like someone sliced the original in half with a saber.
It’s actually not anywhere near half as thick; it’s just two-thirds of an inch thinner (just under an inch thick). But somehow, that fraction of an inch changes how you perceive and feel this speaker.
Now you can reasonably carry this thing in a coat pocket, small purse or even a pants pocket, although the sharp edges will get you. It looks great, too; it’s available in nine colors and five perforation patterns of shiny aluminum (not plastic like the original).
Now, in speakers, smaller size usually means smaller sound. So the big question is, how does the Mini sound?
It sounds fantastic on its own. Much richer, crisper and louder than the feeble speakers on your phone, tablet or laptop, that’s for sure.
When you compare it (“A/B” it) with the original Jambox, though, you can hear what you’re giving up. The Jambox has much better bass and plays louder than the Mini.
On the other hand, the Mini’s midrange and treble seem crisper and more solid than the Jambox Original. And besides: Who but a tech-reviewing nerd would sit there flipping his music playback between two speakers?
The specs and features are much the same as the original Jambox: 10 hours of battery life, charges from a USB cable or a wall outlet, puts a battery-life indicator on your iPhone’s status bar, speaks status messages (like “entering pairing mode”) aloud and acts as a speakerphone.
There’s a 3-D mode that doesn’t do very much. An app for iPhone or Android lets you adjust settings on the speaker (for example, to reprogram the function of its Play button, or to change voices for the spoken alerts); the iPhone version also lets you round up music from iTunes, Spotify, Rdio and Deezer into a single playlist.
The Jambox Mini isn’t the only super-small Bluetooth speaker; in size, its closest rival is probably the $200 Beats Pill (7.5 inches long; it’s a 1.8-inch-diameter cylinder). The Pill can get louder, but its battery life isn’t as good and its Bluetooth circuitry is older. (The Mini offers Bluetooth 4.0, the kind that automatically stops using battery power when you’re not sending it music.)
The bottom line is that anyone who unwraps a Jambox Mini this holiday season — even if it’s you — will be delighted. It looks fantastic and sounds terrific for its size. You can certainly get louder sound or richer bass in a Bluetooth speaker, but not in one this small. Apparently, even Jawbone Inc. can’t completely ignore the laws of physics.