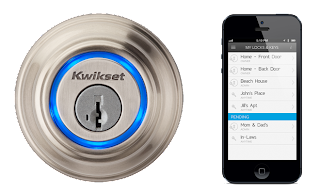 Well, we really should have seen this one coming. The humble door lock key, which has been around in one form or another for literally thousands of years, may be getting replaced by an app ... or more specifically, by an app that works with a dedicated lock. It’s called the UniKey system, and it has some features that are actually kind of clever. The UniKey app transmits a Bluetooth signal from the user’s iPhone, Android or BlackBerry smartphone, which is picked up by a paired UniKey deadbolt lock as it is approached by the user. All the user has to do when they subsequently reach the door is simply touch the outer surface of the lock, at which point the bolt will electronically withdraw. A touch of the lock can likewise be used to engage it when the user is leaving.

While not having to dig out a key and stick it in the lock may be somewhat convenient, what’s more intriguing is the system’s ability to send, revoke, and limit access to virtual “copies” of the key.
If you have a visitor coming to stay with you, for instance, you can simply send them a key to your house via their phone, in the form of a text message. This copy can take the form of a one-time, extended or permanent use key. Regardless of which type is chosen, it can also be revoked at any time. People such as maids, on the other hand, can be granted keys that only operate at certain times.
Should your phone get lost or fall into the wrong hands, the lock itself can be reset to work with your new phone. The lock also does come with a traditional physical key, which can be used if your phone is lost or out of juice. For people who don’t carry a smartphone, a Bluetooth-enabled key fob is also available.
The UniKey company is currently looking at selling the technology to a larger corporation, although it could also end up selling the product independently. The cost per system is estimated to be between US$149 and $199.
Source: UniKey