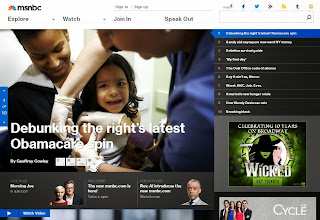 The network formally launched its own website on Tuesday, MSNBC president Phil Griffin announced in a email to the company on Tuesday. "Some of you have been hearing about it for months – others for years – but I’m delighted to say the day has finally arrived." Griffin wrote. "For the first time in 17 years we have our own digital home, and starting this afternoon you can type in “msnbc.com” into your browser to see what all the excitement has been about." The website allows MSNBC to once and for all untangle its brand ties with NBC News following their split with Microsoft, which co-owned MSNBC.com, in 2012. Earlier in October, executive editor of MSNBC.com Richard Wolffe told the Huffington Post that the website would be the "first true digital home for MSNBC."
The website appears to still look the same as it did when MSNBC launched a preview earlier in October. NBC chief digital officer Vivan Schiller wrote in a staff memo on Tuesday that the launch has "been a long time coming," as the site "will now direct to [its] rightful home."