Nexus 5 Availbale on Google Play for $349 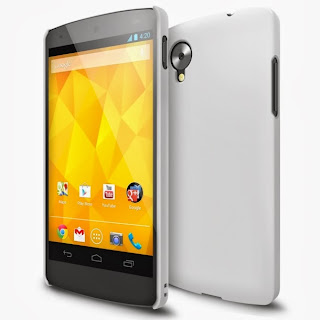 After weeks of rumors about the specs, price and release date of the upcoming Nexus 5, it appears that Google's new Nexus Android smartphone was listed on the Google Play store, before being taken down on Thursday. The device appeared next to the Nexus 7 and Nexus 10 along with the caption "Capture the everyday and the epic in fresh new ways." Google lists the price as "starting at $349." However, when the link to the smartphone is clicked on -- the new page didn't load. And not long after the phone appeared, it was replaced by the older Nexus 4 again. Rumors have been flying the past few weeks about what Google has in mind for the Nexus 5. Supposedly, the device will run Android 4.4 KitKat and be revealed in the coming weeks. The smartphone has been said to cost anywhere from $299 to $399 for the 16GB and $449 for the 32GB. Just last week, the first third-party cases for the device were spotted on Google+.
While Google has stayed mum about the official release of the Nexus 5, it appears that such a device is most likely on the way.Accessory makers are eager to get in on the action. Several Nexus 5 cases are on sale at Amazon, with the retailer saying they'll arrive in stock on Oct. 30, Oct. 31 and Nov. 2. See below for some images of the products.