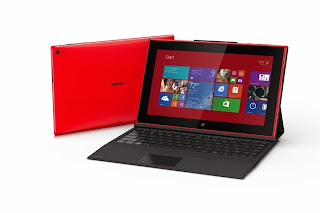 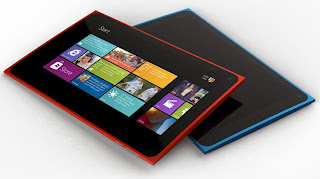 Nokia announced its first tablet -- Lumia 2520 -- at Nokia World in Abu Dhabi. Lumia 2520 is a Windows RT-based tablet with a 10-inch 1080p HD display layered with Gorilla Glass 2. The tablet has a 6.7MP rear camera with Zeiss lens and a 2-megapixel shooter on the front. The 2520 runs on the 2.2GHz quad-core Qualcomm Snapdragon 800 processor and has an 8,000mAh battery. The tablet also sports Nokia's Storyteller and Video Director apps. Nokia 2520 has 2GB RAM, 32 GB internal memory, micro SD card support up to 32GB and SkyDrive cloud storage. Nokia 2520 is 4G LTE-enabled and comes with Microsoft Office pre-installed.Similar to Microsoft Surface, Lumia 2520 pairs with a Nokia Power Keyboard. The keyboard with a touchpad also contains an extra battery for up to five hours extra use, plus two USB ports.Nokia claims Lumia 2520 comes with fast-charging capability, which can go from zero to 80% charged in an hour. The Windows RT 8.1 device priced at $499 will ship later this year. The tablet will first launch in the US, UK, and Finland, followed by other countries shortly after and will be available in red, white, cyan and black colours.