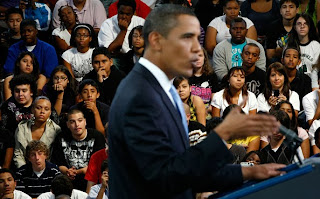 U.S President Barack Obama spoke on Friday at a science and technology-focused high school in Brooklyn, N.Y., to praise it for ushering in a new way to prepare students for jobs in technology. He also outlined aggressive plans to bring high-speed Internet to every student in the United States.
"We should give every student access to the world's information," Obama told attendees. "The federal agency is moving forward on a plan to connect 99% of America's students to high-speed Internet within five years. We need to redesign more of our high schools, so that they teach young people the skills required for a high-tech economy."
The president said he has already met business leaders and innovative educators to learn how to best bring tech into the classroom, and the P-Tech High School, formerly known as Pathways in Technology Early College High School, is a major part of that initiative.

The six-year P-Tech High School program covers grades 9 to 14, which includes four years of high school and two years of college. When students graduate, they leave with an associate degree at no cost — one similar to what would be obtained at a community college. All six years are focused on developing science, engineering and computer skills.
"This country should be doing everything we can to give more kids the chance to go to schools like this," Obama said during the event on Friday. "We should be doing everything to welcome new striving immigrants [...] and give every single young person the same opportunity it gave me [....] P-Tech is proof of what can be accomplished."
P-Tech's program is a collaboration with the New York Public Schools, The City University of New York and IBM, and a part of a larger national effort to ready students for tech-related jobs.In grade 9, each student at P-Tech gets an IBM mentor who stays with them throughout their schooling, which opens up opportunities for jobs at the company when they graduate. Starting in their third year, students can get internships at IBM, too. P-Tech, which is in Crown Heights, Brooklyn, is an open-enrollment school, so anyone who lives in the neighborhood can attend.
"You can learn specific skills that you know will lead to a good job," Obama said. "That means you will be in demand and companies will want to hire you. IBM said you will be first in line for jobs when you graduate. And when the cost of education is going on — and we are doing everything we can to reduce those costs — it will cost P-Tech students zero dollars ." via: mashable