Samsung’s Galaxy Gear is a flop? 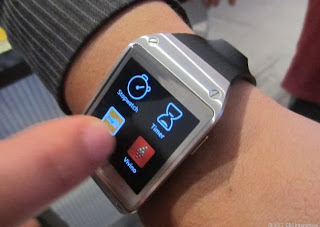 One day there will be a new must-have gadget. It will be on every Christmas list. Pop singers will drop its name in their lyrics, and shoppers might trample each other to get it.
Right now, the Samsung Galaxy Gear won’t be that gadget. Reviews have been tepid at best, and one report said that the device’s return rate is above 30 percent at Best Buy. Samsung hyped up its new product with slick ads that were essentially a collage of smartwatches worn by fictional characters in movies and television shows. Neat! You can finally be like Dick Tracy or Inspector Gadget. But there’s one huge problem.

Successful innovation isn’t about recreating the past or looking to old shows for inspiration. (Remember the flying cars in the “Jetsons”? Or meals in pill form?) To innovate you have to look forward, and imagine what hasn’t been done but should be.
The watch has been described as bulky and clunky. It doesn’t have a “wow” factor. “Using the Galaxy Gear is like having a maid who only takes out the trash: It’s a high price to pay for something that doesn’t offer much added benefit,” wrote one reviewer.If you thought overhearing cellphone conversations was annoying, imagine them on speakerphone, which is the only way to talk on a Galaxy Gear. Samsung appears to know it still has work to do. “We’ve acknowledged that our Gear lacks something special,” a company official was quoted as saying. There’s certainly potential in smartwatches. But for now, the Galaxy Gear is a digital Maginot Line on your wrist, a technology that borrowed too much from the past instead of going where the world was heading. Brennen Byrne wrote a smart essay arguing that computers will essentially disappear as they can predict what we need, so we won’t have to interact with them. Imagine waiting for a bus or train — looking down at your watch — and instantly seeing when your next potential ride arrives. That’s a real innovation, something that changes our lives for the better. But are you going to pay Samsung $300 to check the weather on your watch, rather than pull your smartphone from your pocket?
Combining Google Now — which attempts to offer helpful information before you ask — and a watch might be a winning formula. The company is reportedly nearing a launch of a smartwatch.
It’s too early to say who will make the best smartwatch. Apple is expected to enter the fray as well. Samsung has struck first, but that doesn’t mean the war is over. via: washingtonpost