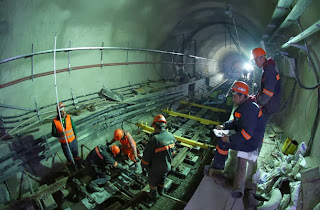 Turkey will on Tuesday unveil the world's first sea tunnel connecting two continents, fulfilling a sultan's dream 150 years ago, but also fueling recent anti-government sentiment for such mega projects.
"Our ancestors worked on (the project). It fell to us to realize it," said Turkey's Prime Minister Recep Tayyip Erdogan of the rail tunnel under the Bosphorus linking the European and Asian sides of the bustling city of Istanbul. The bold project was first imagined by a sultan of the Ottoman Empire, Abdoul Medjid, in 1860, but he lacked the technology and funds to take his idea further.
Erdogan, a former mayor of Istanbul, revived the plan in 2004 as one of his grandiose construction projects for the city that also include a third airport, a parallel canal and a third bridge -- all denounced as "pharaonic" by his critics.

His ambitions were a source of unrest at the mass anti-government protests that swept the country in June, with local residents complaining that the premier's urban development plans were forcing people from their homes and destroying green spaces. Although officially opening on Tuesday, the rail tunnel will not be fully operational.
"The part that is in service is very limited. All that has been delayed to much later," said Tayfun Kahraman, president of the Istanbul Chamber of Urban Planners. "We are wondering why this inauguration is happening so soon." Japan's Prime Minister Shinzo Abe will be present at the official opening, as the Bank of Japan was the main funder contributing 735 million euros ($1 billion) to a project that has cost an estimated three billion euros. Construction of the tunnel that runs 1.4 kilometers (0.8 miles) under the Bosphorus Strait had been scheduled to take four years but was delayed after a series of major archaeological discoveries.
Some 40,000 objects were excavated from the site, notably a cemetery of some 30 Byzantine ships, which is the largest known medieval fleet. But these unexpected finds eventually frustrated Erdogan, who complained two years ago that artifacts were trumping his plans to transform Istanbul's cityscape.
"First (they said) there was archaeological stuff, then it was clay pots, then this, then that. Is any of this stuff more important than people?" The tunnel is more than 50 meters (165 feet) below the seabed and in a region with strong seismic activity the immersed tube is supposed to be earthquake-proof.
Transport is a major problem in Istanbul, which has a population of over 15 million and each day two million cross the Bosphorus via two usually jammed bridges. "While creating a transportation axis between the east and west points of the city, I believe it will soothe the problem... with 150,000 passenger capacity per hour," said Istanbul's mayor Kadir Topbas. "It is an important project that the city needed... it will reduce greenhouse gases," added Kahraman.