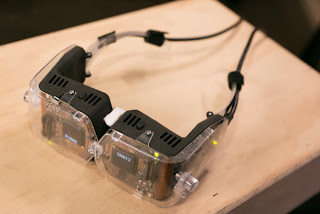 Though the marketplace for head-mounted virtual reality displays remains relatively wide-open, Oculus Rift and Zeiss Cinemizer OLED have shown early potential with goggles and glasses that use screens to feed images to the wearer’s eyes. Avegant’s prototype Virtual Retinal Display (VRD) takes a different approach. Using an array of two million micro-mirrors, these specs deliver a virtual 3-D experience by projecting two separate images onto each retina. Users comprehend the low-resolution light sources as an 80-inch panel, seen from eight feet away. Each projected images offers two times the resolution of competing head-mounted displays, plus a seamless image compliments of precise pixel blending.

Since wearer’s aren’t staring at a close LCD screen, optical strain is reduced, as the eyes are free to work naturally on their own. Avegant’s VRD also includes adjustable optical elements and glasses frames that can adapt to various facial widths, allowing each individual a customizable experience.Avegant plans to demo the final version of its VRD at January’s CES trade show in Las Vegas, with a crowd-funded public launch to follow. The device’s price has has yet to be determined, but is expected to be consumer-friendly and competitive.