Wear An Atomic Clock On Your Wrist 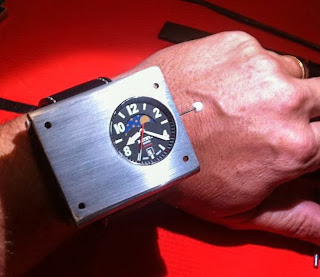 Atomic clocks are typically housed in government facilities and because they’re the most accurate measures of time, they’re used to keep navigational GPS systems accurate and to control the wave frequency of television broadcasts. If you have an atomic clock at home, it probably doesn’t contain the necessarily cesium gas or mechanisms inside, but is most likely connected via a radio signal to a clock at a government institution. But now Bathys Hawaii, a maker of higher-end diver’s and sports watches, has built an atomic watch you can wear on your wrist. Called the Cesium 133, the watch is extremely accurate; it loses only a second once every 1,000 years.

The watch works the same way the government’s atomic clocks do. Cesium is heated and passes through a vacuum tube surrounded first by a magnetic field and then by a microwave field. The microwaves make the cesium atoms change their energy states. When they do that, they emit signals at a very specific frequency.
That signal makes an electronic circuit oscillate, which gives the watch the “beat” to measure seconds with. Cesium oscillates at exactly 9,192,631,770 cycles per second, which is why it makes atomic clocks so accurate. Quartz crystals, used in most watches, oscillate at 33,000 cycles per second. Faster oscillations mean that each second is divided into smaller pieces, so the computer in the watch that calculates how long a second should be can do so more accurately.
In the Cesium 133 wristwatch, the whole atomic clock system is contained in a computer chip, though it still needs a cavity full of cesium gas. That makes it a bit bulky. But the company said in a press release that it plans to get the size down from its current 2.3 x 1.9 x 0.9 inches.
The Cesium 133 won’t be cheap: starting prices will be at $12,000 once it enters production, as Bathys only plans to make 20 of them.
via CNET,