built a solar cell that generates current from both the sun and sound waves. 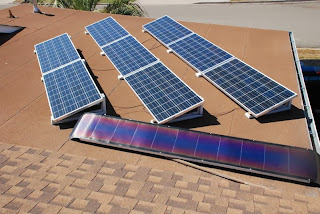 Safa Shoaee, Joe Briscoe, James R. Durrant, and Steve Dunn took an ordinary polymer solar cell and attached a layer of zinc oxide to it. The zinc oxide formed tiny rods, like hairs, except these were only nanometers long.
When the scientists exposed the cell to noise along with light, it generated more current than with the light alone. The sounds that gave the biggest power boost came from pop and rock music.
The increase in power wasn’t just because zinc oxide and polymer have a certain taste in tunes. Zinc oxide is a piezoelectric material. That means it generates current when bent or twisted, or, in reverse, bends and twists when a current is applied. Piezoelectric materials are common; they show up in buzzers and small speakers a lot (the piezoelectric stuff is what makes the sound).
When the scientists played rock or pop, there were more high-frequency sounds and beats, which have more energy than lower frequency ones. Beats, as on a drum, packed a lot of energy into a short period of time.

When the sound waves hit the zinc oxide, it bent it and generated electricity. It took surprisingly little sound, about 75 decibels, to produce 40 percent more power. The sound was about the amount one would hear near a busy highway or a sort-of-noisy restaurant.
Solar Cells Made From Trees Dissolve in Water
Dunn said in a Queen Mary University video that he wants to make bigger devices, and eventually see them in any area where there’s a lot of ambient noise. Restaurants and train stations could use the cells to power displays without batteries, taking advantage of the sun when it’s available and the noise when it isn’t — or using both.
The study was published in the journal Advanced Materials.