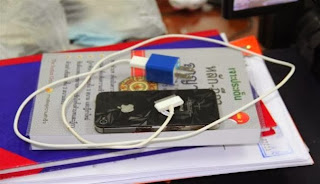 In a rare but not entirely unprecedented incident, a man in Thailand was reportedly declared dead after being electrocuted while using his Apple iPhone 4S when it was charging. It's worth pointing out that the charger was found to be third-party one, and not the original Apple-supplied charger.As per a Tech In Asia report, the 28-year old man from Chanthaburi province was found dead in his room with burn marks across the body and hand. The report claims that the man was holding his iPhone 4S at the time of death and that the smartphone was hooked to a power outlet.While the exact cause of death has not been ascertained, the report speculates that the man might have been talking on the smartphone while charging it, and that the charger could have overheated resulting in the electrocution.In a similar incident,
a Chinese woman was killed by an electric shock when answering a call on her iPhone 5 while it was charging in July this year. Soon after, Apple announced a probe looking into the death of the woman. Previously, an Apple iPhone 5 even exploded during phone call in Thailand.To counter such incidents involving unauthorised after-market accessories, Apple had in August announced a trade-in program for third-party chargers, where people with counterfeit or third-party power adaptors could swap them for certified Apple models for the local equivalent of $10.Samsung has not been far from such incidents as well, as the company's 2013 flagship smartphone, the Galaxy S4 reportedly exploded and burned down a house in Hong Kong.