US Air Force sending 29 satellites into space at once 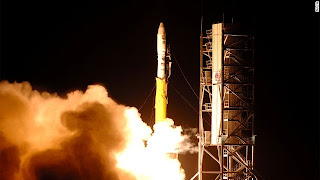 Look to the heavens along the East Coast on Tuesday night, and you might be able to see the Air Force blast 29 satellites into orbit at once.The 29 satellites, the most ever launched at one time, will be aboard a single Minotaur I rocket scheduled to lift off from NASA's Wallops Flight Facility in Virginia at 7:30 p.m. They include the main payload, the Air Force's Space Test Program Satellite-3, and 28 tiny satellites called CubeSats.The CubeSats are aptly named. Also called nanosatellites, they are small cubes, about 4 inches on each side, weighing about 3 pounds and with a volume of about a quart.
Among the CubeSats is the TJ3Sat, built by the students of Thomas Jefferson High School for Science and Technology in Alexandria, Virginia. It will be the first satellite made by high-schoolers to go into space.Once in orbit, the "TJ3Sat will allow students and amateur radio users the opportunity to send and receive data from the satellite. Students and other users from around the world will be able to submit text strings to be uploaded to the TJ3Sat website," according to Orbital Sciences Corp, the developer and manufacturer of the Minotaur rocket.

The students have been working on the TJ3Sat for seven years, according to Orbital.
The Air Force satellite that is the main payload will conduct a variety of experiments during its expected 13-month mission.
The launch will also be evaluated as part of a certification process of the Minotaur rocket for commercial use. That process is being conducted by the Federal Aviation Administration, NASA says.
Orbital says the 29 satellites should achieve orbit in a little less than 12½ minutes after the rocket ignites.
NASA says the launch may be visible from northern Florida to southern Canada and as far west as Indiana.
If you can't see the launch from where you are, it will be streamed by NASA live.