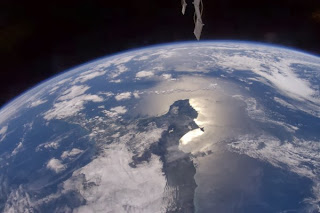 Two high-definition cameras are on their way now to the International Space Station. There, they will aim to revolutionize how we view our planet and ourselves. A Canadian-based company named UrtheCast will offer the world’s first near-live HD video and imagery of Earth from space, using the new cameras. Launched aboard a Russian Soyuz spacecraft on Monday, the two eyes in the sky will be installed on the underbelly of the space station over the next few months. Expectations are that space buffs everywhere with an internet connection will see the first live streaming-video broadcast from the cameras on the company’s web portal early next year.

One of the cameras will offer sharp five-meter resolution stills of a broad 25-mile-wide (40 kilometer) swath of the globe, with pictures taken anywhere between 51°N and 51°S latitude (from England to Chile). The other camera can be pointed at 150 specific targets of interest per day. It has the capability of generating video with super-sharp Ultra-HD or 4K  quality, and offers one-meter resolution.
The crisp images will allow users to see everything from storm systems to vehicles, and even large crowds.
“Look down at the clouds as they roll past landscapes and bodies of water. Watch the sunrise in one country and the sunset in another or view time-lapses of your favorite places and watch how they evolve over time,” read statements on the company’s website.

Because about 200 gigabytes of image data are expected to be downloaded to ground stations daily, it is important to keep in mind that the images web surfers will see on their screens are in near real-time—meaning that there will be delays of a 45 minutes to 2 hours between the time that the image is actually captured and when it is displayed on your mobile device or home computer.

While much of the visual content is expected to be freely accessible, UrtheCast expects to market some of the more specialized imagery to paying corporate and government clients.  For instance they have sold some image rights to a United Nations program that will track natural and human-made disasters.
Once solely in the realm of national security agencies, this kind of hi-def space imagery now has ready buyers in the forestry, mining, or agriculture industries, which have interests ranging from monitoring pipelines to keeping an eye on pests.
Everyday folks are going to be able to go on the website and subscribe for free to directly obtain custom images from the camera. Simply tell them where you live and they will email you a notification when the ISS with the cameras will be passing over your selected target location.
Think of it as your chance to capture your own grand-scale selfie.