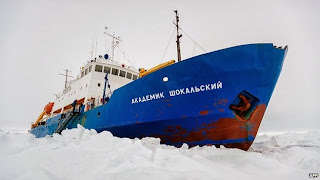 An Australian vessel has arrived in East Antarctica in a renewed bid to free a scientific mission ship trapped in dense pack ice since Tuesday. But bad weather is hampering efforts to reach the Russian Academician Shokalskiy, says the Australian Maritime Safety Authority (AMSA). Earlier rescue attempts by Chinese and French icebreakers were foiled by the thick ice. Seventy-four scientists, tourists and crew are on the Shokalskiy. The vessel is being used by the Australasian Antarctic Expedition to follow the route explorer Douglas Mawson travelled a century ago. The Shokalskiy remains well stocked with food and is in no danger, according to the team. Despite being trapped, the scientists have continued their experiments, measuring temperature and salinity through cracks in the surrounding ice.Three-metre wall AMSA which is coordinating the rescue, said the Aurora Australis was having trouble reaching the Shokalskiy because of "poor visibility".

"The Aurora Australis is travelling slowly due to the conditions to ensure the safety of all on board," the agency said in a statement on Sunday night.
Expedition member Chris Turney earlier posted a video message online saying winds had picked up and it was snowing again. The powerful Australian icebreaker can cut ice up to 1.6m (5.2ft) thick, but it is uncertain whether it will be able to plough through the estimated three-metre wall surrounding the Shokalskiy. If this latest relief operation fails, passengers could be winched to safety by a helicopter on board the Chinese icebreaker, which had to abort its rescue mission on Saturday.
The Snow Dragon came within seven nautical miles (11 km) of the Russian ship before stalling and being forced to return to the open sea. The BBC's Andrew Luck-Baker, who is part of the expedition, said the helicopter flew around the Shokalskiy on Sunday to see if the Snow Dragon could launch another attempt to break through the ice. A change in wind direction and slightly warmer temperatures had caused the ice to crack and formed pools of water. But our correspondent warned that the Antarctica's extremely unstable weather made predictions very difficult.
Via: BBC,AFP