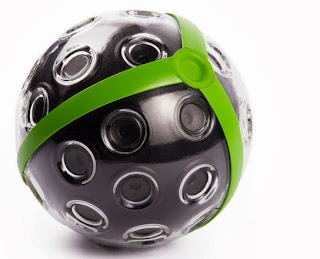 As cool as panorama shots and photo spheres are, they have a serious limitation: They need to stitch together multiple still pics, all taken at slightly different times. But to get a true photo sphere — a 360-degree shot of a single moment in time — you'd need cameras pointing in all directions on a device that can fire them all in sync. What kind of camera does that? The Panono camera, actually: a throwable ball-like device loaded with cameras on its outer surface that looks kind of like Luke Skywalker's lightsaber practice ball from Star Wars. The Panono also has a novel way of taking photos: It's programmed to snap its wraparound pics when thrown, firing all 36 cameras simultaneously when the device reaches its highest point (and is thus not moving, minimizing motion blur).
Once the Panono processes all the individual images, it relays them to the cloud via a smartphone or tablet app, where algorithms splice the photos to create the final 72-megapixel image. Once the photo sphere (now hosted on Panono's site) is relayed back, the user can view it on the phone, online or through an embed code, like this shot we captured at Mashable's office on Halloween. Outdoor shots are even better.It turns out people want to photograph other people," says Jonas Pfeil, inventor of the Panono. "and with the current technology — with stitched panoramas — all [the images] are taken at different points in time. Stuff moves, especially people, so you can't take pictures of the
The Panono is still just a prototype, and the device Pfeil showed us looks pretty much the same as it does when he originally applied for a patent in 2011. That's why Pfeil is turning to Indiegogo to get his ball camera funded, with a campaign starting today.
Jonas isn't the first entrepreneur to attempt to market a ball-like camera for capturing images. The Squito does something very similar, and the Bublcam (which also does videos) has already doubled its Kickstarter goal of $100,000 with over a month to go.
The sudden competition for ball-like cameras isn't a coincidence or a conspiracy. It represents the consumerization of technologies that used to require much more money and effort: high-bandwidth wireless connections, cloud computing, and inexpensive imaging technology that's also of good quality. Now that those techs are as common as the nearest smartphone, inventors can take advantage of them to create new kinds of photography.
Is there a market for it, though? You tell us. Share your thoughts on the emerging field of spherical photography in the comments.