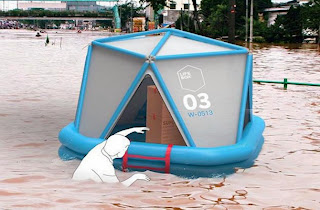 After a flood, hurricane or earthquake, people need shelter, but providing it can be difficult and time-consuming. Adem Onalan, an industrial designer from Istanbul, came up with an answer: the LifeBox, a winner of an award from Red Dot design institute in Germany.
Lifebox is a foldable shelter that doubles as a container for supplies. Each LifeBox is small and light enough to be carried by two people — the whole thing is only about four feet long by two feet high and two feet wide and weighs in at about 165 pounds. A typical pallet can hold eight of them. A 50-foot truck can carry 192 and a small cargo plane can transport 160.

Inside each box is a set of supplies and sleeping bags. Take out the supplies, unfold the box, and voila, instant shelter that can accommodate four people. Several together can make a shelter for a larger family. Unlike a tent, each has a stiffened foam floor, more like a real house.
It comes in one of three designs: land, water and air. The land version is the simplest, which is just the box and shelter. The water version has inflatable rings on the bottom incorporated into the outer layer of the box, so as it unfolds they inflate and you have a small floating house. The air design incorporates a parachute so a plane can air-drop it to a disaster area.

Onalan told Co.Exist said he was inspired by his own experience as a child in 1999 when he experienced a 7.6-magnitude earthquake in his native Turkey, which killed 17,000 people and left his family living in temporary shelters. He wanted to design something easy to use that would allow people to set up shelters near where there homes are, if possible, rather than the usual tent city. The simple, one-piece lifejacket was his basis for the design.
The Lifebox project was just one of Onalan’s ideas; he’s working on others geared to disaster relief, and he eventually wants to have a line of similar products.