This Bike Will eat the polluted Air 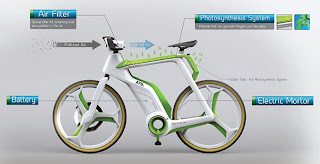 Anyone who has ever ridden a bike in the city knows what it’s like to get a mouthful of exhaust. What if your bike could reduce those fumes and clean the air? A group of designers and engineers from Bangkok-based Lightfog Creative and Design won a Red Dot aware for their air-purifying bicycle designed to scrub polluted air while moving through traffic. The idea, which is not yet a prototype yet, is that a filter between the handles bars would filter polluted air, scrubbing it of particulates. The frame itself would work something like a leaf, converting sunlight into energy that would, presumably run a fuel cell battery, the by-product of which would be good, clean oxygen for everyone. Creative director Silawat Virakul told FastCoExist an email: “Riding a bicycle can reduce traffic jam in a city. Moreover, we wanted to add more value to a bicycle by adding its ability to reduce the pollution.

The only thing better than an air-purifying bike is a whole fleet of them as part of a bike-share program. Now we’re talking.