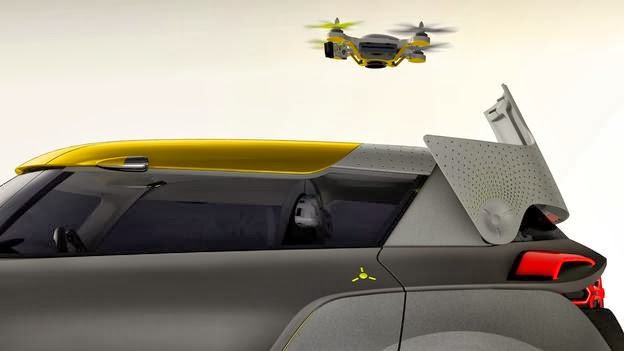 It was inevitable, really, that car and flying drone would meet. And at this week’s Auto Expo India, they did. Renault’s Kwid concept off-roader broke cover in Delhi, and amid the usual show-car flourishes, including an amusing 1+2+2 seating arrangement, it showed off something entirely new: a built-in quadcopter drone. Called the Flying Companion, the drone operates either autonomously, following a pre-programmed flight sequence, or in manual mode, controlled via a tablet computer inside the car. According to Renault’s press materials, “The Flying Companion can be used for a variety of purposes, including scouting traffic, taking landscape pictures and detecting obstacles on the road ahead.” Renault states that the diminutive Kwid could be production-ready within two years – which, from the company that built such oddities as the Avantime and Twizy, are words to take seriously. (Photo: Renault)Via: BBC