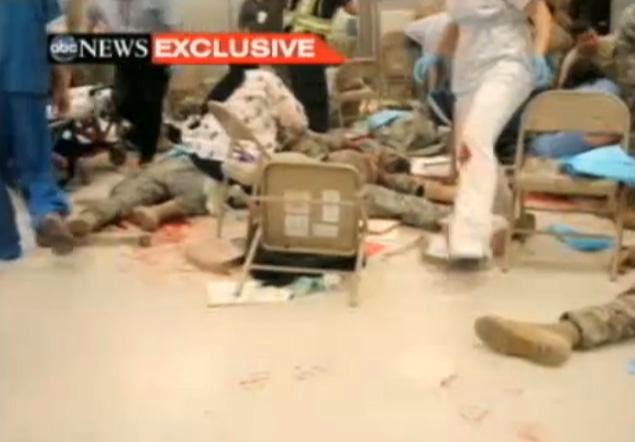 A gunman opened fire on Wednesday at Fort Hood military base in Killeen, Texas — the same site of a November 2009 mass murder that claimed 13 lives. Three people were killed in the shooting and 16 were injured. The shooter died of a self-inflicted gunshot wound. Speaking to reporters late Wednesday evening, Fort Hood's Lt. Gen Mark Milley said there was no known motive in the shooting. He said the shooter,
a soldier who served four months in Iraq in 2011, had mental health and behavioral health issues and was being treated for them. He had not been diagnosed for PTSD. The shooter, who is married and has a family, has not been identified pending next-of-kin notification. He used a .45 Smith & Wesson that he purchased in the local area, Lt. Gen Milley said. The attack was stopped by a female MP, who was "clearly heroic….exactly what we would expect from a United State military police," he said.

President Obama, speaking in front of a black backdrop at a Chicago steakhouse, said, "We are going to get to the bottom of exactly what happened. Any shooting is troubling. Obviously this reopens the pain of what happened at Fort Hood five years ago."
"We're heartbroken something like this might have happened again," the president said.The injured personnel were transported to Carl R. Darnall Medical Center, as well as other local hospitals.
Scott and White Memorial Hospital Chief Medical Officer Dr. Glenn Couchman said on Wednesday evening he was "notified by officials at Fort Hood that there had been a shooting incident over there" at about 5:05 p.m. local time. "We have four patients that are actually here now, and two more en route." Their injuries, he said, included wounds to the chest, abdomen, extremities, and neck, the official said. They ranged from stable to "quite critical."
Waco police had confirmed to Mashable on Wednesday afternoon that there was in fact an active shooter on the base. A spokesperson told us the police department has an official on scene at Fort Hood, and it was on lockdown.
Fort Hood consists of three sections: the main cantonment, West Fort Hood and North Fort Hood. It's one of the largest military installations in the world. Wednesday's shooting happened in the main cantonment, where the majority of the soldiers live and work.