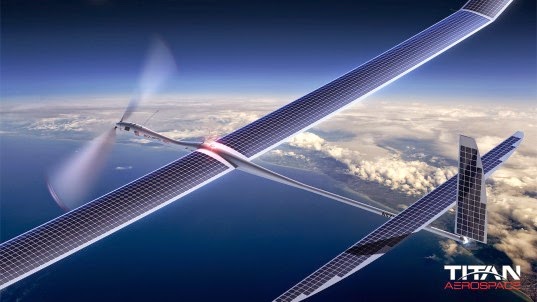 Google has acquired Titan Aerospace, the drone startup that makes high-flying robots which was previously scoped by Facebook as a potential acquisition target (as first reported by TechCrunch), the WSJ reports. The details of the purchase weren’t disclosed, but the deal comes after Facebook disclosed its own purchase of a Titan Aerospace competitor in U.K.-based Ascenta for its globe-spanning Internet plans.
Both Ascenta and Titan Aerospace are in the business of high altitude drones, which cruise nearer the edge of the earth’s atmosphere and provide tech that could be integral to blanketing the globe in cheap, omnipresent Internet connectivity to help bring remote areas online. According to the WSJ, Google will be using Titan Aerospace’s expertise and tech to contribute to Project Loon, the balloon-based remote Internet delivery project it’s currently working on along these lines.

That’s not all the Titan drones can help Google with, however. The company’s robots also take high-quality images in real-time that could help with Maps initiatives, as well as contribute to things like “disaster relief” and addressing “deforestation,” a Google spokesperson tells WSJ. The main goal, however, is likely spreading the potential reach of Google and its network, which is Facebook’s aim, too. When you saturate your market and you’re among the world’s most wealthy companies, you don’t go into maintenance mode; you build new ones.
As for why an exit to Google looked appealing to a company like Titan, Sarah Perez outlines how Titan had sparked early interest from VCs thanks to its massive drones, which were capable of flying at a reported altitude of 65,000 feet for up to three years, but how there was also a lot of risk involved that would’ve made it difficult to find sustained investment while remaining independent.
Google had just recently demonstrated how its Loon prototype balloons could traverse the globe in a remarkably short period of time, but the use of drones could conceivably make a network of Internet-providing automotons even better at globe-trotting, with a higher degree of control and ability to react to changing conditions. Some kind of hybrid system might also be in the pipeline that marries both technologies.
Titan Aerospace also represents just the latest in a string of robotics acquisitions Google has been making lately, which include Boston Dynamics and seven other companies purchased to help fuel its experimental robotics program under Andy Rubin. There’s no question Google has bots on the brain, but thanks to Loon ambitions, the reasoning behind the Titan buy might be the most transparent yet.