Muslim techie beaten to death over FB comment, in India 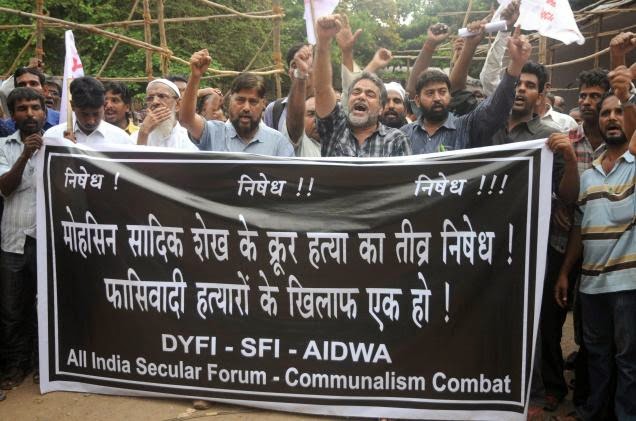 IT professional was killed, allegedly by members of a radical Hindu outfit, as he was returning home Monday night, after derogatory pictures of Shivaji and Bal Thackeray uploaded on Facebook triggered communal tension across the city over the weekend, police said.
Police identified the victim as Mohsin Sadiq Shaikh, a 24-year-old from Solapur district, who worked as an IT manager with a private firm in Pune. They said seven people, aged between 19 and 24 years, have been arrested. They were associated with the Hindu Rashtra Sena, a radical outfit active in the state, police said. (What do you think Leave your comments below-)

The Crime Branch also called Hindu Rashtra Sena chief Dhananjay Desai for questioning. He was later arrested in connection with an earlier case at Pune Cantonment police station, relating to distribution of objectionable pamphlets in March this year.
Shaikh was reportedly assaulted near his rented home in Bankar Colony, Hadapsar, as he was returning with a friend, Riyaz, after offering namaz at a masjid, around 9 pm.
Riyaz alleged that Moshin was targeted because he was wearing a skull cap and had a beard. “I ran from the spot and called his brother Mobin for help. However, by the time Mobin came, Mohsin was badly beaten up and the assailants were about to leave,” he told The Indian Express.
A police team reached the spot soon but the assailants fled from the spot, leaving behind their motorcycles and wooden  sticks. Police seized three motorcycles that helped in identifying the assailants. The arrests were made on Tuesday. Mohsin was admitted to a private hospital where he was declared dead around 1 am.The derogatory photographs, uploaded on Facebook and circulated through WhatsApp on Saturday, triggered communal tension in the city as activists of Hindu outfits and political organisations indulged in violence and arson. More than 200 public transport buses and private vehicles were damaged in the past two days and incidents of arson, stone-pelting and rioting were reported from many parts of the city.