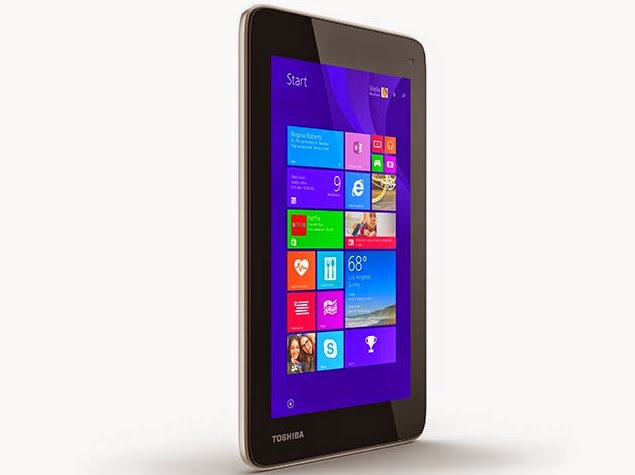 Toshiba, expanding its range of Windows tablet PCs, had launched two new Windows 8.1 tablets in the Encore 2 range in late May. However, the Japanese manufacturer had another Windows 8.1 tablet, the Toshiba  Encore 7, to showcase at Computex 2014.

The tablet was unveiled by Microsoft's Corporate Vice President, Nick Parker, at the sidelines of Computex 2014, and was touted to be targeted at the budget tablet segment. The new Encore 7 has been developed by Toshiba in association with Microsoft and Intel, reports the Microsoft-News blog.
The report, citing Microsoft, claims that the tablet is expected to go on sale in the coming months, but so far, no pricing details have been revealed.
The new Toshiba Encore 7, as the name suggests, features a 7-inch display with a resolution of 1024x600 pixels. The tablet as mentioned above runs Windows 8.1 and is powered by an quad-core Intel Atom Z3735 processor clocked at 1.3GHz coupled with 1GB of RAM. There is 16GB of inbuilt storage, which is further expandable via microSD card. Other specifications include a front-facing camera (unspecified megapixels) and 3.5mm headphone jack.
The Encore 2 range of tablets launched earlier with 8-inch and 10-inch screen sizes run on the recently announced Windows 8.1 with Bing version. Seeing as the Encore 7 is meant to be a budget tablet, we imagine it will also run the same lower-cost OS version - though this has not yet been specified by the company.
The 10-inch and 8-inch Encore 2 tablets have been priced at $269 (roughly Rs. 15,900) and $199 (roughly Rs. 11,800) respectively and would be available in early July in the US.
Both the Encore 2 tablets with 8-inch and 10-inch screen size sport the same (1280x800 pixel) resolution multi-touch display. Both come with a front-facing 1.2-megapixel HD webcam and a 5-megapixel rear camera with auto-focus capable of recording full-HD videos. Both the Encore 2 tablets Intel's quad-core Atom Z3735F processor (Bay Trail-T with Silvermont micro-architecture, with reference clock at 1.3GHz) and includes 32GB of inbuilt storage.
Earlier, Toshiba had also announced an Android 4.4 KitKat tablet dubbed Excite Go. It has been priced at $109.99 (roughly Rs. 6,500) and would be available in early July. Toshiba's Excite Go comes with a 7-inch (1024x600 pixels) resolution display. It runs on the same Intel quad-core Atom Z3735F processor like the above mentioned Encore 2 tablets. Equipped with 16GB of inbuilt storage, the tablet can support up to 128GB via microSDXC card. It has been also noted that the Excite Go would feature 1GB of RAM.