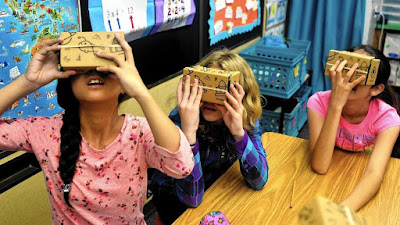 Sophia San Pedro shifted in her chair as she stared into a little box. "I see a monkey. There's a monkey right next to you," Sophia told a friend sitting next to her. As Sophie whirled around, a large gorilla came into her view. "Oh, it scared me," she exclaimed.
Fifth-graders at Georgetown Elementary School in Aurora went to the Congo, an Amazon rain forest and even the moon Thursday morning without ever leaving their classroom.
For an hour, 31 randomly selected Georgetown students tested the new Google Expeditions program that allows students to use technology to take any of 100 virtual journeys around the world. The virtual field trip was repeated across Indian Prairie School District 204 earlier this month for fourth-graders at Georgetown and sixth-graders at Still Middle School in Aurora and in Naperville for fourth- and fifth-graders at Cowlishaw Elementary and sixth-graders at Hill Middle School.
During the expeditions, students gaze through cardboard virtual reality headsets that look much like old View-Master stereoscopes. Inside Google's three-dimensional cardboard scope is a phone that is synced to a tablet the teacher uses to guide students through the virtual scene.

Janille Price from Google Expeditions said she and the other Google employee merely provide set-up and technical help. It is up to the teacher to decide what adventure best suits lessons plans. "It's very user friendly once you start playing around with it," she said.
Less than 5 minutes after the Georgetown students and their teacher were handed the equipment, the kids were looking up and down and turning 360 degrees in their chairs in search of bull sharks in the ocean.
Teacher Arlene Plaza stopped periodically to draw attention to certain animals, such as the great white shark. She merely posted a target on the shark on her tablet and arrows in the students' viewers directed the kids over the spot where Plaza wanted them to move.
As students floated like divers in the virtual shark cage, Plaza was able to discuss how a great white can swim 15 mph, grow to 6 meters long, and detect blood in the water from 3 miles away because of its enhanced ability to smell.
Then it was off to another scene.
Kyrie Moen was captivated by the coral reef. "There's a whole bunch of colors and a whole bunch of fish," Kyrie said.
Taylor Chaney-Curry was amazed how she could zoom in on the animals. "It feels like you just got teleported to a scene," she said.
Amber Quinn said it is fun seeing places she probably won't ever visit. "It looks cooler than an actual picture because you can see around you," Amber said.
The idea for bringing Google to the school came about through Andy Fekete, an instructional technology specialist in District 204. Fekete said he is active with Google Apps For Education and got to experience Expeditions at a conference this summer. When Google, approached him about coming into District 204, he said he jumped at the chance. "I knew who cool it was," Fekete said.
Allan Davenport, director of instruction technology for the district, said the district strives to give all students access to the same opportunities. "Some students might never have the opportunity to visit these locations," he said.

Davenport said not only does the virtual adventure enhance learning and make students future-ready, it helps them become more globally aware and understand their role in the world. "Discussions after their expedition become much richer," he said.