Engineer develops origami battery that costs only a few cents 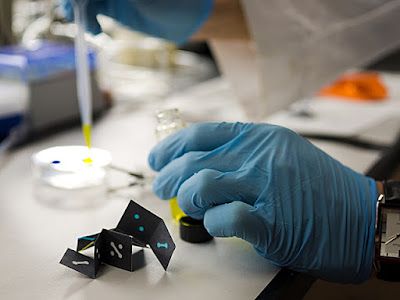 With origami, Japanese folding technique, it is possible to create small devices and at the same time very strong. Such materials are present solar panel LED's and now these innovative batteries. However researchers at Binghamton University in New York, developed the batteries using dirty water of bacteria to function which in turn have great performances.
According to the researchers, as bacteria are the microbial respiration, the device captures the energy generated during the process. This energy is sufficient to run a biosensor with just a drop of dirty water.The Korean engineer at Binghamton University, Seokheun "Sean" Choi explains that any organic material can be a source of bacteria that perform this such a mechanism.

This battery, besides being very cheap, can be applied in various areas of development. The materials used for the creation of the artifact are paper, cathodes low cost and dirty water.Together, they do not cost more than 5 cents per battery.
The battery, which folds into a square size of a matchbox, use an air breathing cathode inexpensive made with powdered nickel on one side of the plain paper, while the anode is a screen printed carbon inks , which repels water, and marked with wax.The water filled bacteria may come from a variety of sources, including the local sewage, biomass or watersheds, for example.
To this day, biosensors needed to be matched to a portable device for it to be done your analysis. The Choi's next step is to create an independent and self-powered system in which the paper battery can fully perform the biosensor.
For this, the engineer received a sponsorship of US $ 300,000 from the National Science Foundation.