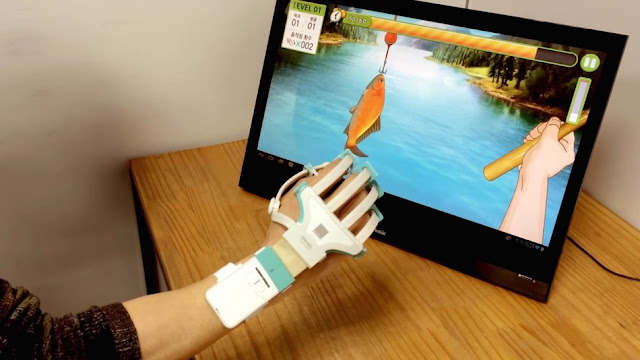 The Rapael Smart Glove looks a lot like the Nintendo Power Glove, but it's not exactly a video game controller. It's a smart rehabilitation glove for recovering stroke patients.
Gaming was definitely a huge part of it, however. The glove, created by Korean health tech company Neofect, incorporates motion-based games to help stroke patients relearn how to use their arm and hand.Neofect founder Ban Ho Young told Tech In Asia that everything they have now was made with collaboration between rehabilitation experts and game designers. Gaming helps to motivate patients, especially when he estimates about 85% of South Koreans don't complete their stroke rehabilitation programs. In South Korea, about 105,000 people experience a stroke every year, according to a study in the Journal of Stroke. That's compared to almost 795,000 people in the U.S., according the the Center for Disease Control and Prevention.

“Just moving someone’s hand in a certain way won’t improve that person’s condition because a large part of rehab takes place in the brain,” Ban said. “We see a lot of focus on the clinical side of things and not enough on the motivational.”


The concept follows suit with other companies like Limbs Alive, which developed gamescontrolled by devices similar to the Nintendo Wii's nunchucks.

With Rapael, users can play games depending on which movements they want to work on. Want to improve your forearm supination and pronation (facing your palm upward and downward)? Strap on the glove and virtually pretend to pour yourself a glass of wine. Want to improve your finger flexion and extension? Bend and unbend your fingers to decorate cupcakes with icing.The glove has sensors that monitor movement in the user's arm and hand. The bending sensors can also tell if the hand is bending in one direction or another. The sensors send information to a computer system that sees the amount of individual finger movement, according to Forbes.

The glove is also Bluetooth-enabled, connecting everything to an app and the Rapael Smart Rehabilitation System that analyzes and records data to track the patient's training progress.

Neofect launched Rapael, which costs $10,000 USD, last December and was first offered to hospitals and rehab centers in South Korea. As of July 2015, Neofect has shipped 20 Rapael units to hospitals and is used in top institutions such as Seoul National University Hospital, the Samsung Medical Center and the National Rehabilitation Center, according to Tech In Asia.

Once the software has been reconfigured for personal home use, the Rapael will be available to consumers early next year. Patients will be able to rent Rapael for about 100,000 KRW ($85 USD). Although Rapael isn't available for use in the U.S. just yet, the company has already started its marketing efforts.